How the Story of Moses Shaped America

Hailed as one of the most original works of history in years, America’s Prophet reveals how generations of Americans have been inspired by the story of Moses.

The pilgrims quoted his story. Franklin and Jefferson proposed he appear on the U.S. seal. Washington and Lincoln were called his incarnations. The Statue of Liberty and Superman were molded in his image. Martin Luther King Jr. invoked him the night before he died. Ronald Reagan and Barack Obama cited him as inspiration. For four hundred years, one figure has inspired more Americans than any other. His name is Moses.

Traveling through touchstones in American history, bestselling author Bruce Feiler traces the biblical prophet’s influence from the Mayflower through today. Meticulously researched and highly readable, America’s Prophet is a thrilling, original work of history that will forever change how we view America, our faith, and our future. 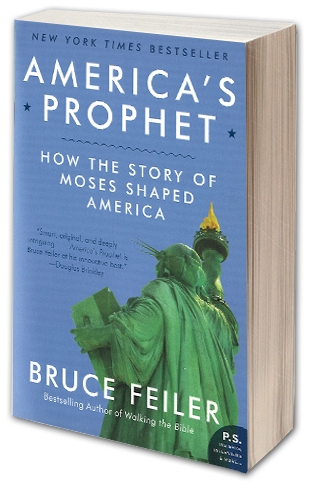 “This is one of the most original, intelligent and endlessly fascinating books I have read in years: it should become a set book for anyone wanting to know what truly makes America tick”—Simon Winchester

“With a journalist eye and an adventurers spirit, Bruce Feiler brings his prodigious gifts of biblical analysis to a reconsideration of Moses as the essential prophet of the American Experience. This is an accessible and engaging book of indispensible insight.”—Tony Horwitz

“Feiler confidently concludes that the major themes of Moses’ story continue to shape America and affect the lives of countless Americans, such as Bill Clinton and Barack Obama. Fascinating and thought provoking.”—Booklist, starred review